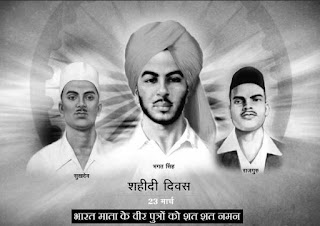 The Shahid Din, the death anniversary was observed in our college library. Many Students and staff members were present on the occasion.
A book exhibition on this occasion was arranged. Book written on Bhagat Singh, Sukhdev and Rajguru were exhibited for readers.
Prin. Dr. K. G. Nimbalkar  garlanded the photographs of Shahid Bhagatsingh, Sukhdev and Rajguru.
23rd of March is also declared as the martyrs day in India to remember the sacrifice and pay homage to the Bhagat Singh, Shivaram Rajguru and Sukhdev Thapar. Bhagat Singh, Shivaram Rajguru and Sukhdev Thapar were fought for India against the British rule for independence.
Bhagat Singh, a well-known freedom fighter in the history of India, was born on 28th of September in 1907 in the Lyallpur, Punjab in the Sikh family. His father was the member of an organization called Ghadar Party working for the independence of India. Bhagat Singh together with his companions Rajguru, Azad, Sukhdev and Jai Gopal fought for the assassination of Lala Lajpat Rai. The daring adventures of Bhagat Singh have become a great inspiration for the youngsters of today.
In the year 1929, on 8th of April he together with his companions threw bombs over the Central Legislative Assembly reading slogan “Inquilab Zindabad”. They charged with the murder and hanged at 7.30 pm in the Lahore jail on 23th of March in the year 1931. Their body was cremated at the banks of the Sutlej River. Now a day, a big Shaheedi Mela (Martyrdom fair) is held in the birthplace Ferozepur, at the National Martyrs Memorial in the Hussainiwala (Indo-Pak border).
Courtesy:http://www.indiacelebrating.com/
at March 23, 2016